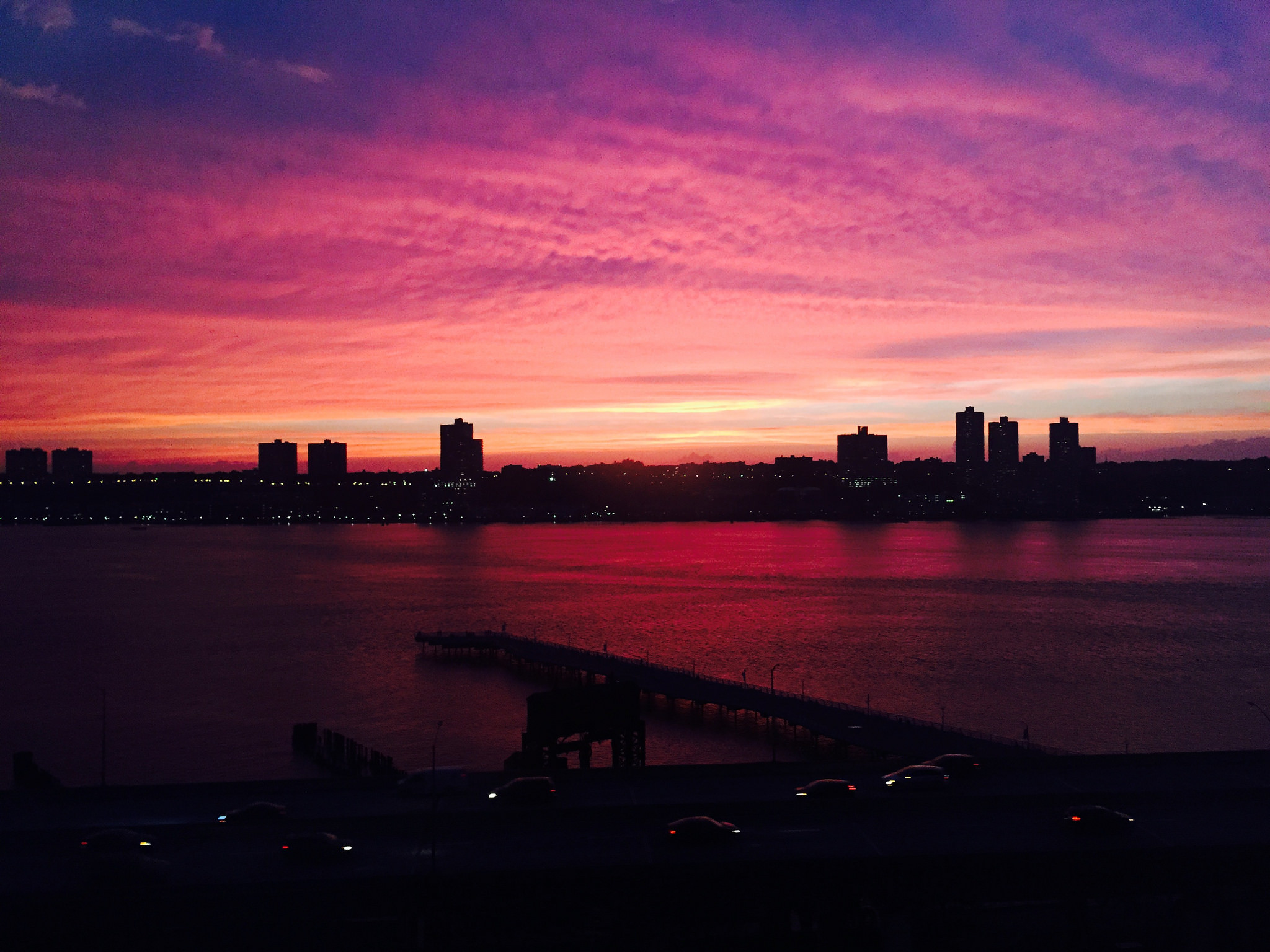 We spent the last month of the year back in Manila and I originally planned to draft this annual review on the 31st.  Our visit this time around proved to busier than usual, finding ourselves jumping from one gathering to the other with baby in tow. It was the good kind of crazy.

Well, it’s February now and Max will be celebrating his first birthday soon. This took me longer than expected.

2015 was a pretty interesting year. The arrival of Max meant getting acquainted with a different kind of life, something Rica and I  have learned to love and enjoy. Outside of parenthood, there were a couple of major changes as well, with me joining a new startup (News Deeply) and the Medinas getting closer to our plans of moving back to Asia.

While I do have a penchant for meticulously planning ahead, this year has taught me how to embrace and more importantly – manage curveballs. Life will find a way to surprise you. Certain goals you’ve set at the start of the year will never be met. Thankfully, it diverted us to even better things. 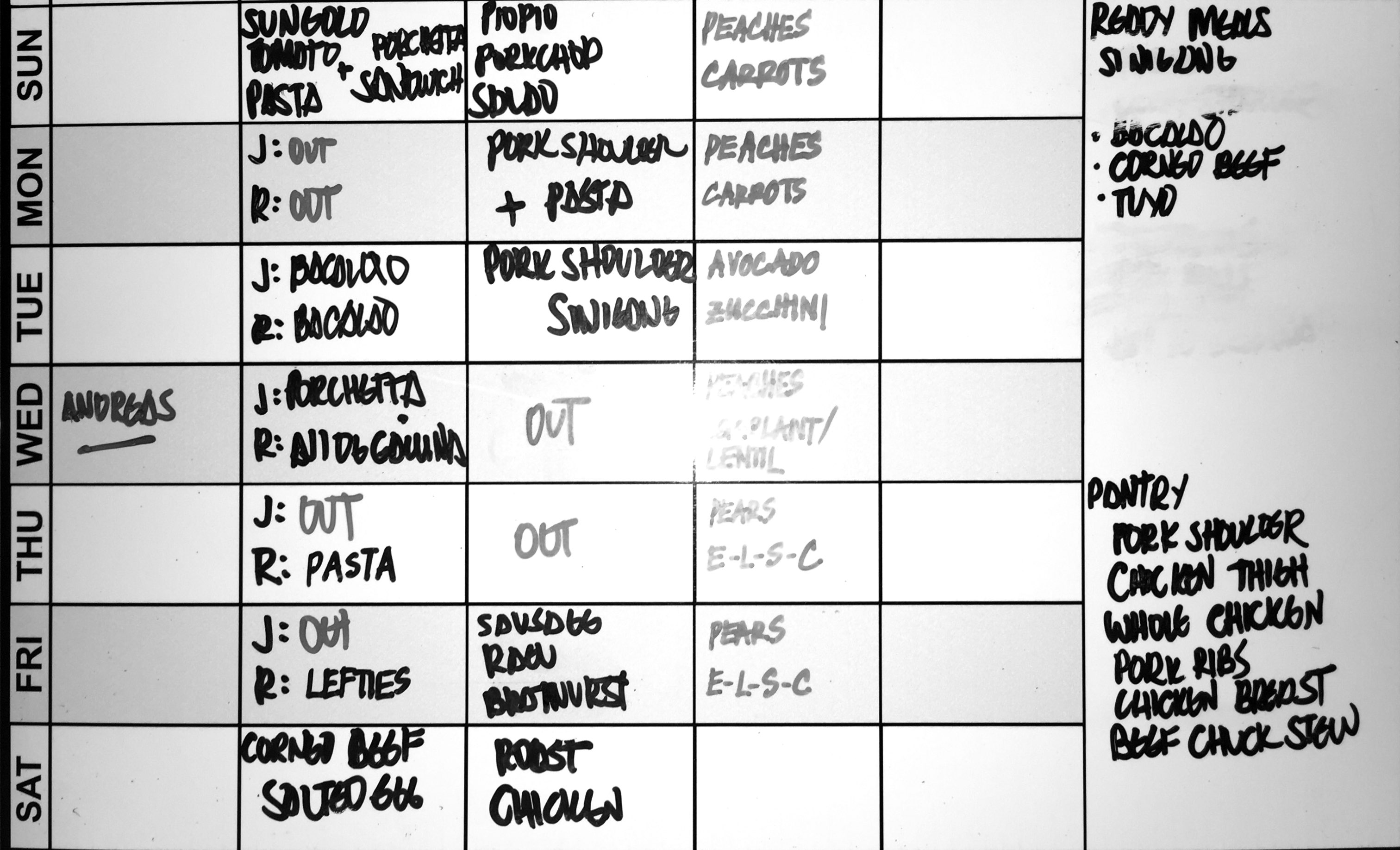 Having Max around meant staying in and cooking meals at home. We actually bought a magnetic dry-erase meal planning board to complement meal prep Sundays  – ensuring that we have a ready meal every night. I’m thankful for the NYT Cooking app, Budget Bytes, The Food Lab and our parent’s recipes for giving us a lot of inspiration. When we moved to a new apartment in March, we were so happy to get a unit with a great kitchen that allowed us to experiment with roasts and broil pork belly at home. 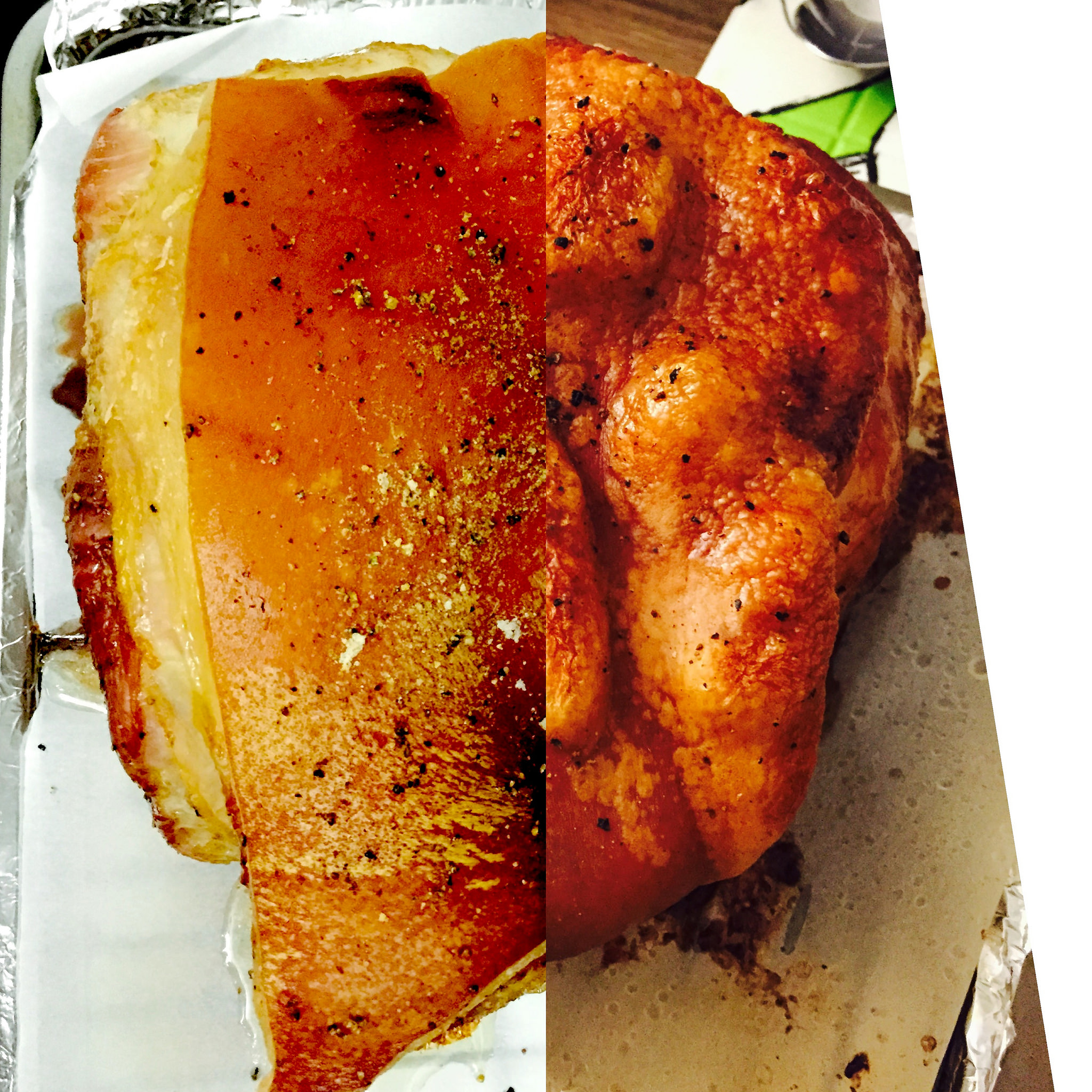 Kenji Lopez-Alt’s recipe for Ultra Crispy Pork Shoulder gave us an excuse to host dinner at home and I made it almost twice a month in 2015. It was a ridiculously simple recipe. All you have to do is buy whole pork shoulder from the grocery, season it liberally with salt and pepper and let it roast at 250F for 8-hours in an oven. You then rest the meat for about 2 hours then finish it off with high heat – 500F for 20 minutes.  This recipe will give you 6-7 pounds of crispy, tasty meat that you serve fresh to your guests. This also results to glorious leftover meat and which you can repurpose as fauxchetta sandwiches with Ciabatta, Sinigang na Lechon and twice-cooked lechon. Key here is assembling a good set of condiments, and we ended up consuming bottles of Momofuku’s Ssam Sauce, Nuoc Cham and Mang Tomas.

On nights where we were just too tired to cook, we order in.  As new parents, this was a godsend and orders usually come from two restaurants. We learned to appreciate Legend 72’s Mapo Tofu and paired it with General Tso’s Chicken and some Dan Dan Noodles. Then there’s Chirping Chicken in the Upper West Side with their charbroiled chicken while Rica remained consistent with her combo of chicken wings and lentil soup. These are by no means the best restaurants in our neighborhood, but the two have officially entered comfort food territory.

I decided to be frugal this year by dining Al Desko and ended up eating more rice than usual. Still, I left some room for the occasional lunch out and this gave me an opportunity to explore lunch options in SoHo. Compared to Flatiron, the selection was pretty disappointing unless you’re willing to trek all the way down to Chinatown. Should you find yourself in SoHo and looking for cheap-ish lunch, I highly recommend Lahore Deli along Crosby – a hole-in-the-wall Pakistani Biryani joint frequented by cabbies. Lahore also opened me up to the joys of achar, so much so that I had to beg the guy at the counter to sell me a vat of their National Mixed Pickles. I also lined up for Parisi Bakery’s Deli Sandwiches to eat the not-so-secret “Dennis” sandwich. This sandwich so huge that I had to look for a Parisi buddy willing to share half of the sandwich with me. Except that one time… 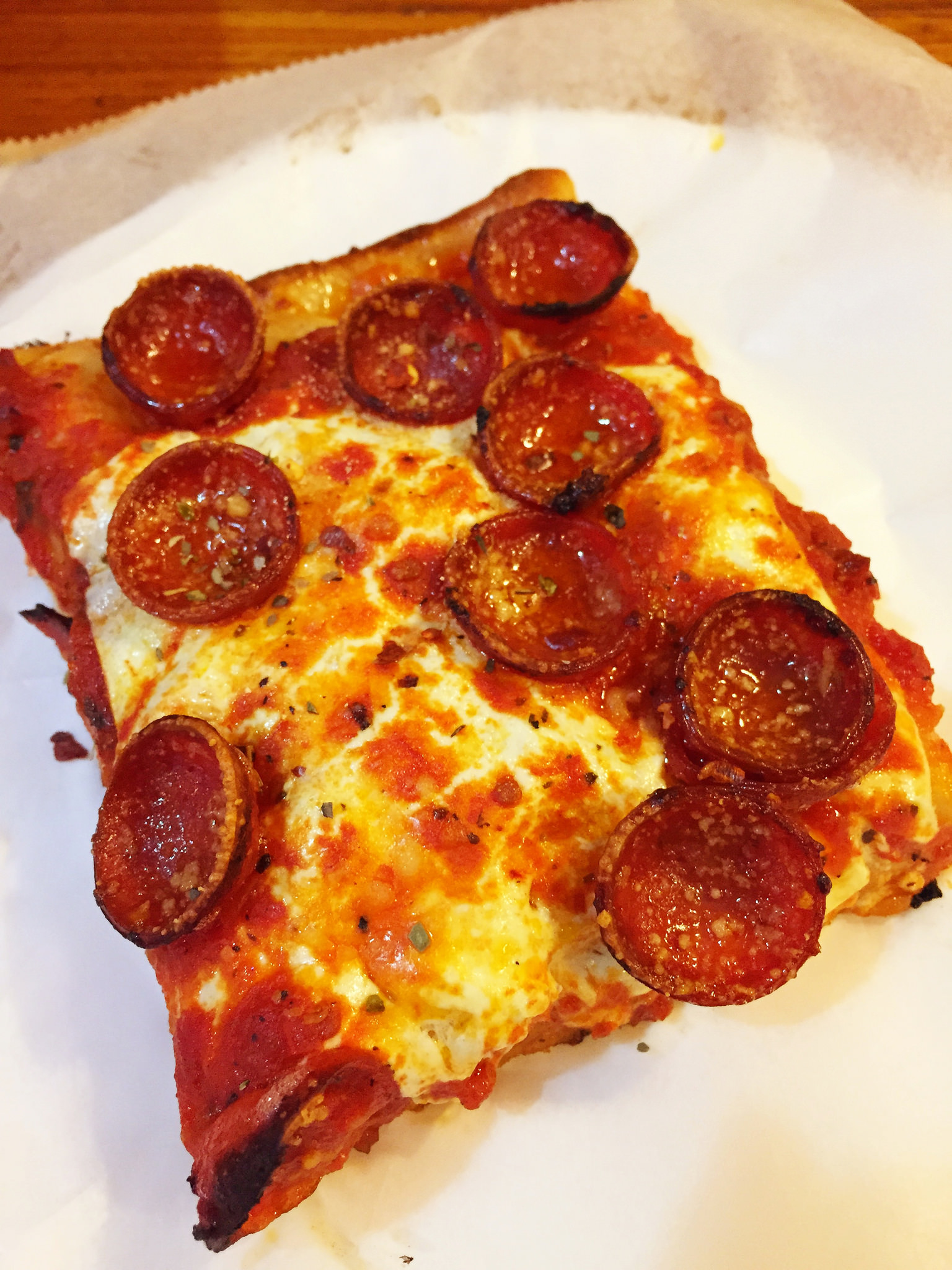 The best thing I ate this year was the Pepperoni Square from Prince St. Pizza. In all of my 5 years here in the city, I can safely say that Prince St. takes the crown for the best slice of pizza in the city. While I’m still partial to New York Pizza Suprema, the greasy/spicy goodness of a Prince St. Pepperoni Square (make sure you get it extra crispy) after three pints of $4.00 IPAs from Botanica  (a ritual my friend Elvin and I go through once a week) made the New York City hustle worth it.

I’ve been living a post-quantified self life. This left me with habits I picked up from tracking multiple aspects of my life like food, steps, runs, heart rate and body weight. Self-tracking was instrumental in building good habits. The payoff happens when you stop logging, akin to taking out your training wheels.

I remained fairly consistent with exercise this year, setting a modest target of 100 runs for 2015. Not only did I exceed this target with 142 runs, but I finally finished my first sub-2 half-marathon (Staten Island, October). I’ve been a running traveler as well,  going out for a jog in different cities this year, from the lakes of Minnesota to the boardwalk of South Beach.

I still track my steps with Fitbit, logging of 6.4 Million steps or roughly 2,900 miles. I tend to do really well in warmer weather and things tend to be more relaxed every time in Manila (December) since I don’t really get to walk that much.

By the way, I’ve seen so many people sign up for Fitbit only to drop off a few months later. I noticed that most of my inactive friends owned wearables while I just owned a Zip all this time. I personally believe that pedometer usage should be ambient to encourage long term usage. The Zip iws perfect since you can just stuff it in your pocket – it doesn’t have to compete with your other devices in terms of wrist real estate!

2015 was the year when I finally quit “tobacco”. When Max was born, I promised Rica that I’ll finally quit smoking. As a pack a day smoker, this proved to be extremely difficult. This all changed when I arrived home from work last May and felt a bit of numbness on my left cheek. I honestly thought I was having a stroke. I  panicked and told Rica that I might have to rush myself to the ER. After having my blood pressure checked in a nearby CVS, I found out that I was suffering from hypertension. My friend Crischelle, whom I typically call during medical emergencies, advised me to quit right away.

That was a massive wake up call for me. Despite the fact that I was technically okay in terms of my heart attack risk, I was rattled enough to finally quit tobacco. Besides, I’ve been experimenting with e-cigarettes early in the year and it was fairly easy to stop smoking cancer sticks from that point onward. So yeah, I vape.

Admittedly, I’m not strong enough to drop nicotine altogether, but thanks to vaping, I’ve completely lost my appetite for Marlboro Lights.  While the verdict is still out on the relative safety of e-cigarettes, I’m definitely breathing better, consuming less nicotine and spending less on this silly habit. At least vaping provides you with a clear pathway towards completely ditching nicotine and I’m proud to say that I’m slowly reducing the amount of Nicotine in my body.

I got to see more of America in 2015, thanks to a job that involves a lot of travel. Being part of a geographically distributed organization has its challenges and we mitigate this by organizing regular retreats all over the world. I’ve had a chance to visit Minnesota and Miami for the first time this year and saw a different, non-touristy side of D.C.

I wish I had time to travel for pleasure but I had to make way for work and of course, staying in the city with a too-young-to-travel Max. Yet, I somehow managed to visit Manila, Cebu and San Francisco twice this year. I’d actually give travel a D this year since I haven’t been to obvious places like Japan and Europe(!). This needs to be fixed. 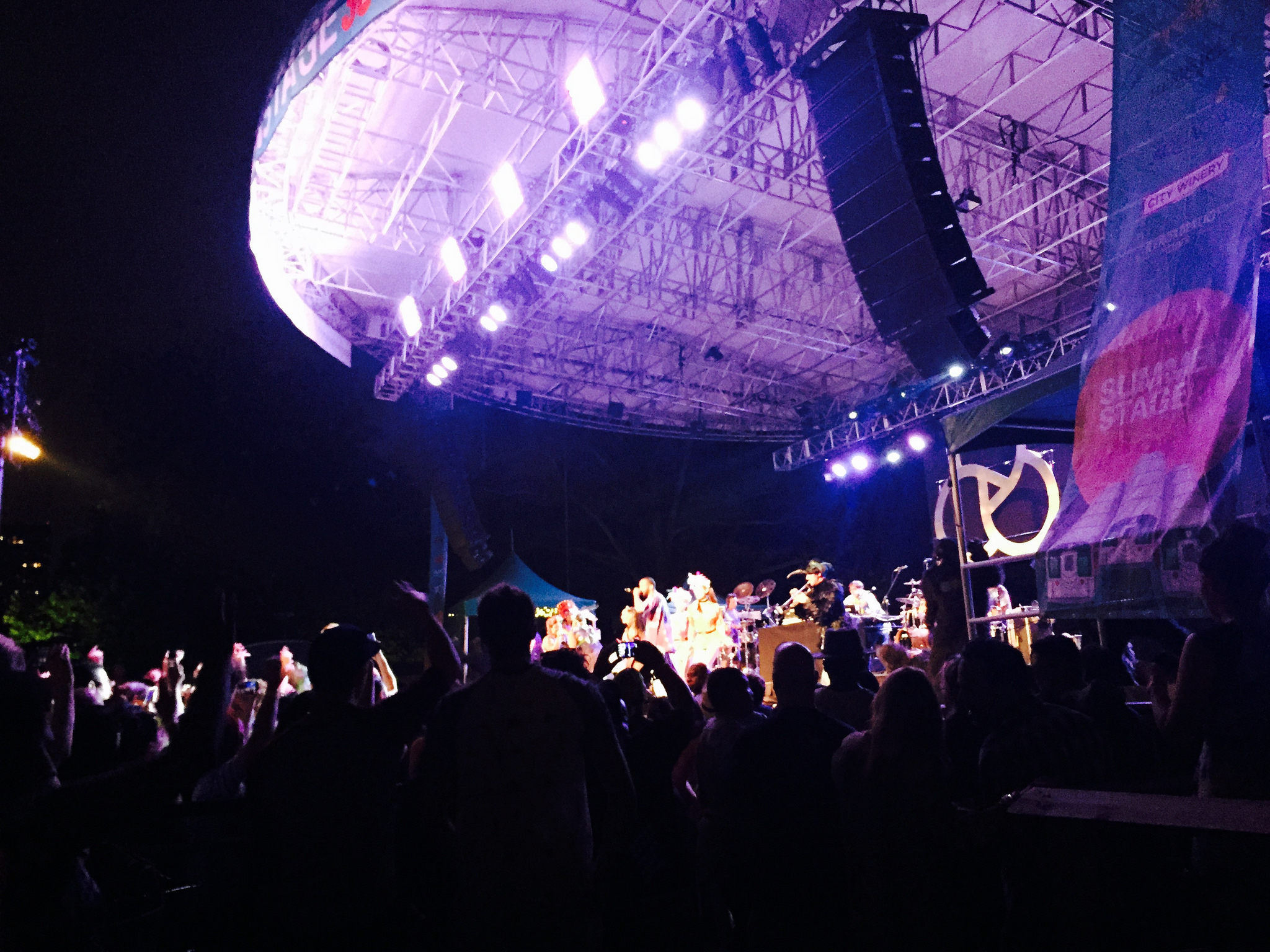 2015 was okay (in the truest sense of the word) in terms of music and I wasn’t surprised that Charli XCX(!) was my top artist for the year. The thing is, I don’t even know all of her songs, I just got obsessed with “Doing it” and “I Need Ur Luv” (it kinda felt weird just saying that) at the start of the year. Other notable artists include Jamie xx, Say Lou Lou, Kate Boy, Shura and Allie X.  As for live music, I was happy to see Say Lou Lou, Juliana Hatfield and one of the best concerts I’ve had in New York – Basement Jaxx in Central Park.

My song of the year goes to Kelela’s Rewind,  a track that magically dropped on my Spotify Discover playlist late in the year. The song was nostalgic in a sense that I found so much novelty in its Miami-bass-ish sound.

I completely dropped mp3s altogether and went full streaming. It’s now a mix of 70% Spotify and 30% Soundcloud. I’ve long lamented the discovery features of Spotify so when they introduced the Discover Weekly feature last year, it was truly a godsend. Soundcloud remains to be a great platform for new music and it deserves to exist in a world dominated by Spotify.  I’ve written so much about Last.fm and they also introduced a major redesign. I was meaning to add my last.fm seasonal graph here for some insight but this feature was discontinued – much to my disappointment.

Once again, here are some boring stats for your enjoyment

It’s the second month of 2016 and I kinda feel funny talking about last year and sharing my plans for the year. Still, there’s still so much do, learn and give this year.  There will be major changes as well, and we’re getting more clarity with a potential move back to Asia (not necessarily the Philippines).